First a few shakedown cruises around the Solent to make sure the boat was ready. Here is Eleanor making sure the steering works

We set off from Dartmouth with a crew of 2 – Stefan Hedborg from Goteborg in Sweden and myself to take Romano across the channel and the infamous Bay of Biscay after saying goodbye to Gill and Ray who sailed down to Weymouth with us and will rejoin in the Canaries.  This was a first for both Stefan and I neither of us had completed a four day crossing of the bay and to say the least we were somewhat apprehensive.

We left Dartmouth with the sun coming up and rounded Start Point around 09.30 from there we set a course for A Coruna in Northern Spain. Crossing the Bay was a mixed experience, we had everything from flat calm to F6 and 10m waves for the last 12 hours. Highlights of the crossing were the night skies, many sightings of dolphins who would stay with us for up to an hour at a time playing tag in and out of our bow  wave. The groups were up to 15 or so in each school, they were our guides and friends showing the way and keeping us entertained.

Best of all was the sighting of some fin whales, one of which passed within 10m of the boat just the most awsome and slightly scary experience but WOW!!! – just as well that they had good steering = not sure how well we would have coped being hit by a 30 metre whale. This picture shows the whale some distance from us by the time I found the camera and closed my mouth! The whale is just visible surfacing in the distance – trust me I have a witness in Stefan! 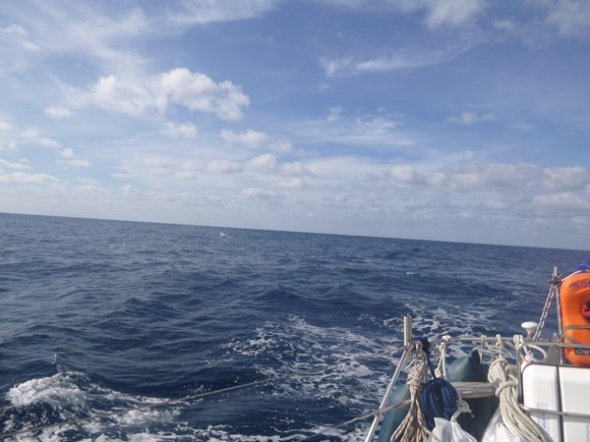 Our last day was the most testing it was rough weather for 24 hours and we were both on watch through the night and the next day. The wave hight and wind progressively increase to F6/7 as we neared Coruna in Galicia. Our last few miles were a grim beat to weather before we found a safe harbour. Both the boat and crew were really tested on this trip and both came through well. I was really pleased with the boat she sails well in light winds and pushes her way through the waves in heavy weather with ease, at no time did I feel we were at risk and she is just the boat to go around the world in. Both Stefan and I learned a lot about the boat and longer distance sailing but we make a good crew and saw through the tough times well. 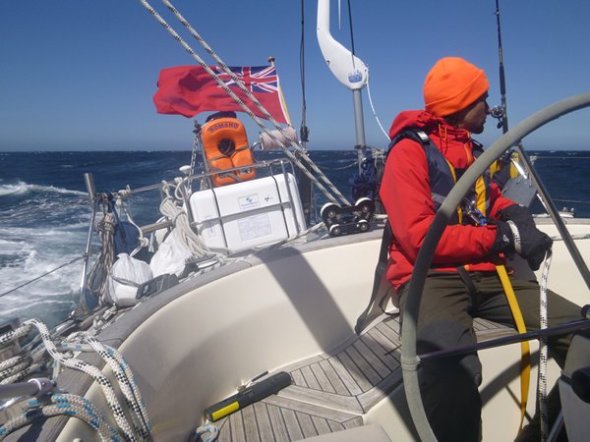 3 thoughts on “Across the Bay of Biscay”