We have now arrived in Lisbon and are anchored off a place called Cascais. Stefan left for his boat in Barcelona which will take him to Brazil from where he will cross the Andes to Chile where he joins Nano’s band as percussionist. A real adventure and it was a real pleasure having him on board, I will never forget the flute music haunting our journey across the Bay of Biscay. On the wa y since the last post we stopped at Figueras da Foz, Nazare, a lovely if very busy holiday res

We took the funicular railway to the top of the point and these were the views. 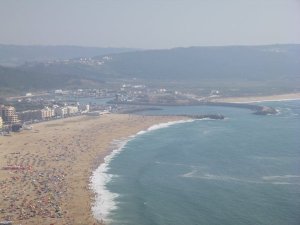 The world record is held here for the highest wave ever surfed at 30 metres by an american. The photos are stunning – see google for the pics.

The journey here has been a real adventure for Stefan and I – the highlights had to be the Dolphins and the Whales, Stefan playing the flute, making it across the Bay in one piece, arrival in A Corunna, Paella in A Corunna in the balmy heat with cold beer, the beautiful anchorage just around Finisterre, and many more. There were no real bad bits, the last day crossing the Bay we took a hammering but we coped and more to the point so did the boat, and motoring down the Portugese coast with little wind was boring but all in all we had a great time and both learned a lot. I am now an expert in South American Folk Music – just joking Stefan!

Once Sim arrives on Tuesday we will decide where next and what the next stage of the journey will be – Africa or Gibraltar or Madeira and the Med and then on to pick up Gill and Ray in the Canaries on the 22nd October.

3 thoughts on “Arrival In Lisbon”