Morro Jable was our last port in Fuertaventura and we left there at 6 am to cover the 57 miles to Las Palmas on Gran Canaria before nightfall, this is where the majority of the ARC (Atlantic Rally for Cruisers) boats are congregating. This year 260 boats will be leaving from Las Palmas for St Lucia at the end of November so we phoned ahead to see if we could get a berth there as Jon Osborne from Kika who were already there, emailed to say they were turfing boats out to make way for the ARC, however the marina agreed we could have three days there.

When we arrived an English guy took our lines at the reception pontoon and we got talking, he turned out to be quite an amazing character. He had suffered from bone cancer had all his toes, half his fee and most of his fingers amputated though being given the wrong treatment so afterwards having lost all faith with the NHS and being given a month to live turned to homeopathic remedies of  bitte apricot kernels and sweet mollasses and bicarbonate of soda all of which he had read about on the internet in one last desperate attempt to cure himself which he has done and is now, to the amazement of his doctors completely clear 6 months on. He now lives on his boat in the Canaries sailing the Islands and manages to balance and sail the boat with incredible handicaps. He is one of the most positive full of life people I have met and an example to many others in his position.

Once moored up we contacted our friends on Kika and invited them over for a drink. The facilities here were very comprehensive so we spent our time doing maintenance work on the boat and overhauled the engine, working with a Spanish Volvo mechanic who spoke no English, a challenging exercise but we finished the job and I am now a fully qualified gofur who can fetch and carry in Spanish.

After our three days were up in Las Palmas we set sail for Santa Cruz the capital of the Canaries located at the foot of the volcanic peaks on the north end of Tenerife and we toured the cities spectacular streets and architecture on an open topped bus. 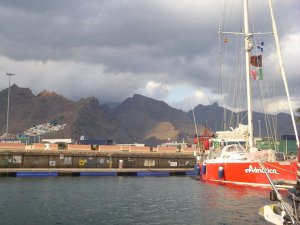 After a couple of days in Santa Cruz we decided to anchor at San Atoria, a small village about 30 miles south. Here we anchored in crystal clear waters and spent a couple of days lazing in the sun, reading and swimming with fins and snorkel to watch the fish life and inspect our dragging anchor. It wasn’t too much of a problem but we needed to keep an eye on it to ensure we didn’t wash up on the rocks.

The next day we sailed the 20 miles to San Miguel marina by the airport to meet with Nancy and Kate, Sim’s wife and daughter and managed a day sail with them although there was little wind and very calm seas which pleased our visitors. After they left on the 21st October our reinforcements arrived in the form of Ray Millan and Gill Walton for the next phase of our voyage down to the Cape Verde Islands and across the Atlantic to Grenada in the Caribbean. 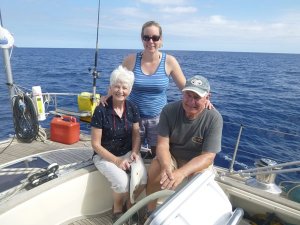 In the picture above with Ray and Gill you can see the 12000 ft peak of El Teide in the background. Nancy, Kate and Sim managed to get within a whisker of the top while they toured the Island. We are now in La Gomera and about to go off on a tour of the Island by car tomorrow. 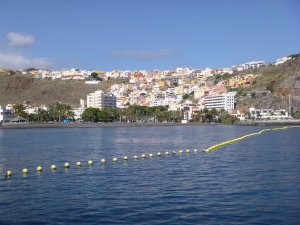 Before leaving San Miguel we stocked up at the local supermarket, being unsure of the facilities on La Gomera and El Hiero so we individually loaded three trolleys often with repeated items and filled the hire car so much the springs were bottoming out. Some of this we wanted to freeze for the Atlantic trip and some for our 7  day sail to the Cape Verde Islands some 800 miles south.

Our next stop will be El Hierro some 50 miles south of here before leaving for the Cape Verde Islands and I will update the blog there if we can get internet access.

4 thoughts on “Las Palmas and Tenerife”