We arrived in Antigua very pleased to have crossed the Atlantic without serious mishap but with a long list of jobs to do and conscious that we were arriving in the week before Christmas, knowing many places would be winding down or already closed.

As it happened, we were lucky to find Oscar, a Rastafarian engineer trained in England in most aspects of boat maintenance, fortunately for us Rastafarians don’t celebrate Christmas and Oscar was available to us during the holiday period.  He helped us complete 34 of the 44 items on the list!!  The only major item still outstanding was the new autopilot which refused to function in accordance with the manual (more of this later).

Most of the days leading up to Christmas were working days sorting out the boat.  However, we did find time to go ashore on Christmas Day for the open party in Nelson’s Dockyard with the anticipated climax of a lobster dinner in the Admiral’s Inn which turned out to be turkey as the fishermen were unable to go out in the rough weather (poor dears!)  On Boxing Day it was back to boat fixing which kept us busy until we had completed those jobs which we could in Antigua.  In order to keep costs down we moved out of the superyacht marina to anchor in Falmouth Harbour bay.  We were the smallest boat there by around 100ft.  The closest anchorage we could find was about half a mile offshore and it was at this time that the outboard decided to start playing up.  Fortunately, the oars came to the rescue on more than one occasion and the skipper was a lot fitter for the experience. 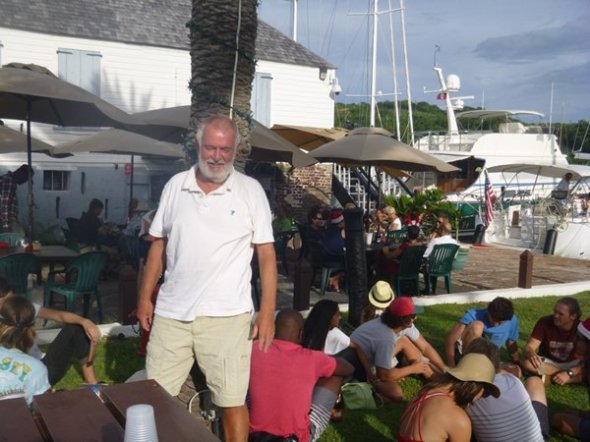 In amongst the Christmas revellers

Our second day off was spent at Pigeon Beach where a series of rain squalls ruined any chance of sunbathing.  At least we could swim without getting any wetter!  Fortunately, there was a bar where we were able to take shelter and the odd refreshment

We decided to celebrate the New Year in St Maarten and as the autopilot still wasn’t working, we took Oscar, the engineer, with us to finish off the job, leaving at 4.0pm for an overnight sail in fairly strong winds.  We reefed down twice in what proved to be a fairly stormy night.  As the dawn came up, the winds dropped and St Maarten came into view. 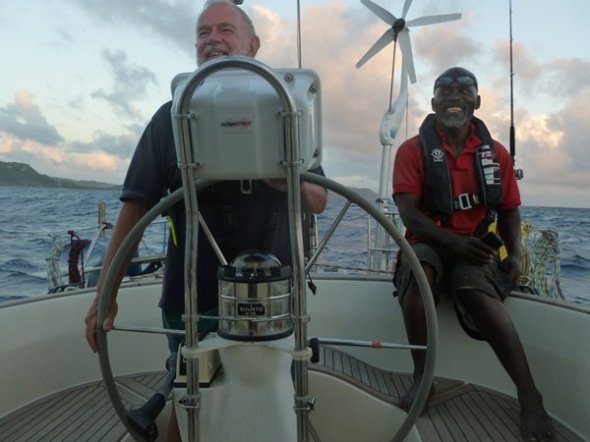 We decided to take the boat into Simpson’s Bay where most of the repair facilities were available.  To enter the Bay meant passing under a lifting bridge with a belligerent operator who refused us entry as we were approaching behind a super yacht and, according to him, we weren’t close enough.  While we were waiting to enter two hours later we anchored just off the bridge but kept dragging and on raising the anchor discovered a huge boulder trapped between the claws of the anchor which the puny female crew was unable to despatch (and nor was the impatient skipper – for quite some time).  Once in the lagoon we made several attempts at anchoring which failed because it was either too shallow or the anchor wouldn’t grip on the weedy bottom.  An hour later, in desperation, we decided to make for a marina where we stayed for a week (more work, little play, lots of time spent at the chandlers!)

On New Year’s Eve we managed at last to organise a lobster dinner, albeit Mexican style and then on to La Bamba – a Latino beach bar with a firework display at midnight and a paddle to mark the beginning of the new year.

New Year’s Day for Gill is a double celebration being also her birthday, a fact the skipper forgot and will probably never be allowed to forget for the rest of his life!!  The day was spent at the beach swimming and sunbathing and joining in a local beach party.  As partial atonement for his sins (not forgotten), Mike ordered two of the largest lobsters in the tank and two bloated people staggered back to the boat. 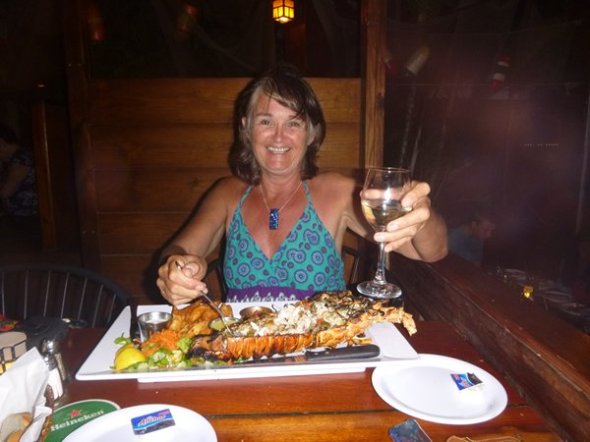 New Year and the birthday girl gets the lobster this time, a 3lb whopper!

Later that night and ready for a swim!

After fixing most of the items on the list and having grown weary of marina life we decided to set sail for the first time with just the two of us for the British Virgin Islands, some 100 miles to the west.  The first part of the journey was idyllic in sunshine, with calm seas and a gentle breeze.  Our contentment obviously provoked the sea gods and the second half of the journey (in the dark) was spent in high winds, squalls, with boats coming at us from all directions.  Making landfall at night is never easy and this night was no exception.  We had selected Pirates’ Bight on Norman Island as our overnight anchorage.  When we arrived we found it occupied by another 100 or so boats, which meant threading our way through to find a spot we could anchor without hitting somebody.  We dropped the hook at 1.00am and spent a further hour checking that the anchor wasn’t dragging in the strong gusts coming over the island.  Sleep was difficult while we were making regular checks on our position in the bay.  By morning the winds had abated, the sun had come out and all was well with the world.  We made our way to Tortola to check in with Customs and Immigration and afterwards Gill made a beeline for the icecream parlour.  While we were waiting at the counter, there were shouts of “Gill, Gill” from an English couple who it turned out Gill had met in Trinidad the year before.  This was the second coincidence in two days – the other being a meeting at the chandlery in St Maarten with a Canadian couple she had met two years before in Grenada – such a small world.

It was then on to Beef Island to test the anchorage at Trellis Bay which unfortunately had been overrun by charter boats and moorings at $30 a pop so we moved on across the bay to Marina Cay but the same problem there. By now we were getting a bit fed up with the BVIs and the overly commercial attitudes to everything. We eventually found a very rolly anchorage on the south side of Scrub island, with no one about. The following day we made for Jost Van Dyke which was a very picturesque bay and town with charming officials to carry out clearance but once again after several attempts at anchoring and dragging, including nearly sinking the dinghy, losing the pump and the baler (later to be recovered) in a another bloody bay full of mooring buoys we were forced to find $30 to fund a peaceful night. We had had enough and left the following day for Tobago Island (an uninhabited rock) where we found a tiny inlet just wide enough to take the boat and enjoyed a peaceful night.

‘That’s us at anchor just above the table’

Next morning we were up at the crack of dawn, thankful to leave the BVIs and sail to the Dominican Republic, skirting around the USVIs and Puerto Rico as we didn’t have a US entry visa only available back in Barbados (not very visitor friendly). This made a trip of 285 miles to Casa de Campo, however, we decided to stop at the beautiful Isla de Saona and anchor for the night. The trip took longer than planned and we ended up anchoring at midnight and to cap it all the heavens opened with a deluge just as we arrived. Two very soggy, tired and grumpy people threw out the anchor and turned in. We woke the following morning to blue skies, palm trees and a pure white sandy beach – heaven. As the tourists poured in en-masse in lots of local boats we then left and had one of the best sails of the trip for the remaining 20 miles to Casa de Campo marina. We had reached the Dominican Republic and completed another stage of the journey.

One thought on “The Caribbean Adventure”