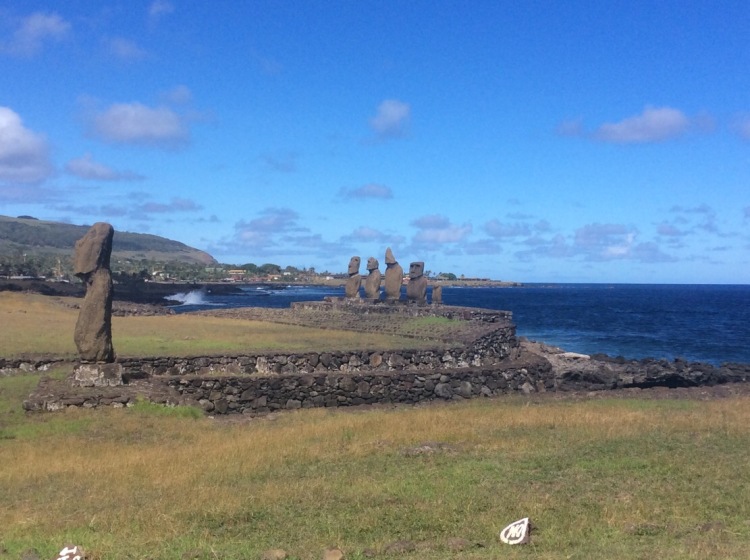 Hanga Roa looking over the anchorage

After only one day in Hanga Roa and a quick visit to shore in the afternoon, we were informed that the weather was changing and we should head north to the protected anchorage off Anakena. Hanga Roa’s anchorage is a good mile offshore where the surf breaks relentlessly over the rocks and we had anchored in 24 metres of water, crossing our fingers that the weight of our now extended chain would hold us firmly to the bottom. It had been quite an operation to add to our normal chain length with that normally reserved for the Fortress anchor (our second anchor) and now it all had to come up, be re-assigned and stowed. Never the less we decided to follow the others and motor sailed to Anakena which turned out to be a picture-perfect bay with a huge sandy beach, backed by palm trees and an impressive line of Moai statues. In the end we spent several days there, swimming, walking and exploring the area as well as getting to know our fellow sailors (a mixture of Swedes, Dutch, Americans, French and an interesting and gutsy Estonian girl who for her first sail had joined her new French boyfriend in Patagonia for the rounding of Cape Horn), during a barbecue evening. The barbecue and social was great, but the drenching I received from our untimely arrival in the surf at the beach wasn’t so welcome and from then on I made sure I always carried a change of clothes ashore, just in case! 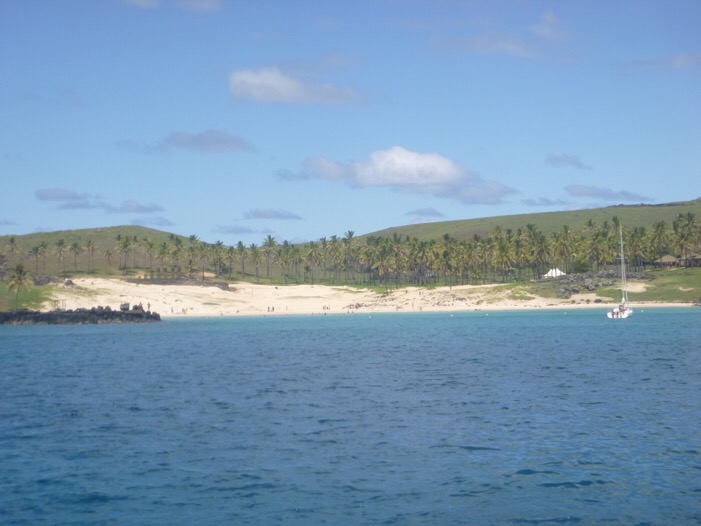 The lovely beach at Anakena

With the change of the winds to the south-east, our little Armada left en masse to return to Hanga Roa. Rich decided to trek across country and meet us back in the town so Mike and I set off in pursuit of the other cruisers. The engine coughed to a start with smoke coming from the starter motor – the next problem had emerged. We couldn’t risk turning the engine off with the prospect of the deep anchorage ahead so sailing was out. Rounding the headland we bounced into the waves and the dinghy swung wildly from side to side rapidly filling with gallons of water. Even without the engine we still surged forward in the current at 4 knots so we did a quick about turn and Mike jumped into a rearing, half submerged dinghy to bail. Once emptied and tied tightly to the stern the dinghy remained close in our wake and we continued to Hanga Roa where we dropped all our chain once again.
The little town of Hanga Roa has only a small fishing harbour, the boats now mainly used for ferrying divers out into the clearest waters I have ever seen. The entrance to the harbour is precarious on a calm day with breakers rolling in and the surfers riding in alongside us and we have held our breath on several occasions as we rode the top of the wave between the rocks to arrive safely in the calm of the harbour or worse still going back out through the foaming crests. Fortunately, a wetting is all we got and nothing worse with all our shopping, water, etc on board. Once in the harbour we had to negotiate the cats cradle of ropes and clamber out onto the dock – once was enough for me at low water as I dangled over the edge not being able to pull myself up or drop back into the dinghy which by then had swung away. Finally, pushed up from behind I rolled unceremoniously onto the dirty concrete, not an elegant way to arrive so after that Mike dropped me at the other side of the harbour where the fishermen obligingly pulled me up the steps to safety. 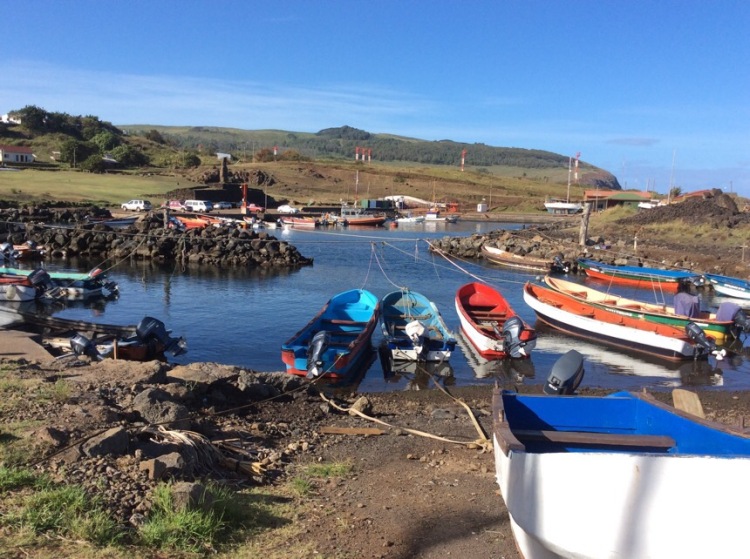 The pretty harbour at Hanga Pika

The town itself is little more than one long street, dotted with clothes shops displaying colourful Polynesian wraps, dresses, tops, etc and small, basically supplied supermarkets with little cafes and bakeries selling delicious empanadas and wonderful cakes which we weren’t slow in savouring. Local fruit – papayas, pineapples, apples, oranges, mangoes and bananas – and all sorts of vegetables were readily available from the market and from the backs of trucks along with the meat truck with the flies being kept at bay by the lady with a large leafy fan. Our favourite spot (or mine anyway) had to be the ice-cream parlour overlooking the harbour with its rich and unusual flavours of homemade concoctions – papaya and orange, mandarin and passion fruit – my idea of heaven!
One of our concerns was that our gas would run out long before we reached Tahiti and neither Pitcairn nor the small French Polynesian islands are likely candidates for refills. So Rich and I went in search of a supply, following instructions to the edge of town, and beyond. Having walked some distance without seeing a likely source and looking lost as only strangers can, a smiling lady asked if she could help and telling us to wait 5 minutes said she would be back. She returned in her car and not only drove us to the propane supplier but elbowed her way through the waiting queue and took us to see our options. Having been told previously that only the huge household sized tanks were available we were relieved to find something we could fit on board, albeit that this larger tank, together with the last one bought in Panama have to sit on top of the chain and be lifted in and out of the locker before we can anchor – a small price to pay for cooked food! Veronica generously offered her services once again if we needed them but a lift was readily offered by yet another kind local with truck when the guys returned later to buy the tank and transport it back to the harbour.
We ambled along the open cliff top dotted with Moais and freely roaming horses – there are hundreds around the island and until recently they were apparently the main means of transport. We wandered through and admired the little cemetery with its ornate and decorated graves (mostly with artificial flowers but one was covered in a rambling tomato plant and when I remarked on it to a local lady, she replied that the incumbent had been a farmer – that seems logical!). Another sported an empty rum bottle! We spent a couple of interesting hours in the little museum reading up on the history and culture of the island and mused that its ancient customs and peculiarities seemed very close to that of the Maoris.
It was decided that we needed further exercise so we hired bicycles for a few hours and I was grateful for the gentle inclines and the well maintained bikes. At Ahu Akivi we saw the only set of Moais which do not have their backs to the sea, a peculiarity which remains unexplained. Returning to Hanga Roa we were waylaid by a brief visit to the tiny but exquisitely laid out Botanical Gardens which without much advertising and tucked away as it is we fear probably does not attract many visitors to admire the work of the one industrious gardener who appears to do everything.
Still not knowing if we were likely to be detained in Easter Island for any length of time waiting for a starter motor but hoping with fingers crossed that Volvo Santiago would have one in stock (which fortunately they did and flew it in within days to us), 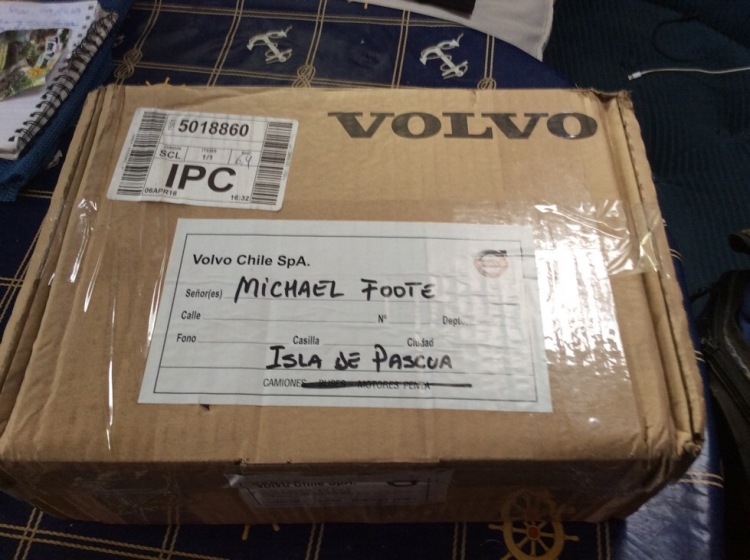 Rich suddenly dropped the bombshell that he had decided to leave us and fly to Chile for a month’s holiday before returning to the US. We were totally gob-smacked as he had promised to stay until Tahiti and his reasons for leaving seemed unlikely. But that’s crew for you!!! So we are now back to just the two of us and the prospect of less sleep!
Mike and I still wanted to see the rest of the island and it was a matter of fitting it in around installing the starter motor and weather but with Saturday seeming like the last opportunity we hired a car for the day and set off around the island.
Orongo is probably one of the most historically famous and spectacular sights perched as it is on the top of the volcano Ranokau overlooking on one side the sea 250 metres below and the crater on the other. In the 19th century, the yearly custom was for the tribe to move to Orongo where they had built 54 low stone houses with tiny square apertures to squeeze through just to keep their few possessions during that period. The Chiefs nominated their Hopus (underlings) to swim across the adjoining passage to the far islet to collect the first Tern’s egg of the season and return plus egg, climb the steep cliffs back and present the egg to his Chief who would then be the “chosen one” for the rest of the year, living in idle luxury (of the period!) Seeing as the islet of Motu Nui is a fair distance from Easter Island with rough, shark infested waters and strong currents and the cliffs look like a climber’s nightmare you have to wonder what the penalties were for saying “no” to the order to go fetch an egg!
We continued around the island to see the highlight of the Moai collection at Tongariki (15 enormous statues which have been renovated and replaced with help from the Japanese after being knocked off their pedestals during a tsunami some years back). Only one has retained his red scoria topknot or hat unfortunately and the others lay waiting to be replaced, maybe at a later date.

The last and probably one of the most impressive sights was the quarry where the statues were fashioned in situ. The slope of the volcano Ranokau Raraku is the quarry and the whole hillside is dotted with finished or partially finished Moais with many still attached to the rock face waiting to be finally released and somehow slid down the hillside. It’s not hard to imagine that after many months of patient work, many were lost as they toppled in an uncontrolled fall down the steep volcano sides – their remnants are still in evidence, including one which must have been the Daddy of them all at 21.8 metres tall. 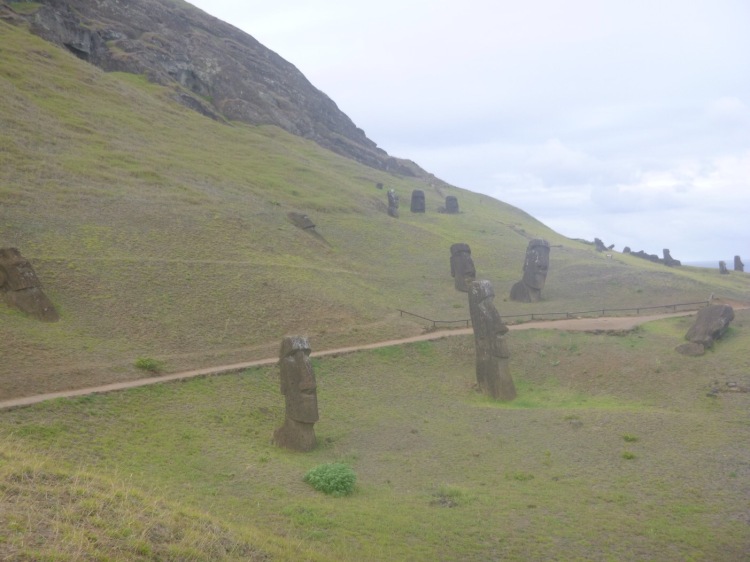 The Quarry where all the Moai’s came from

As we drove back to Hanga Roa we could see the weather changing and the rain sweeping in and as we reached the town, the handheld radio burst into life with an anxious Port Captain warning us that we should leave the anchorage as soon as possible. We battled through the surf, drenched yet again and within half an hour we followed our fellow cruisers (only one other boat left now) down the coast and round the corner to a more protected anchorage where we anchored in the dark.
As I write this we are waiting for the winds to swing back to the SE so that we can continue our passage to Pitcairn in the company of a young American couple – it’s a large empty ocean down here and knowing that there are others out there is comforting.
So from here we head for little-visited Pitcairn and thereafter French Polynesia – the Gambier, Tuomotus and Society Islands where once again we should be able to post a blog. Unfortunately, with Rich’s departure we can no longer produce the tracker.

One thought on “Easter at Easter Island”